As I left Glasgow the sun was shining after a quick shower of rain.

Driving up the road beside Loch Lomond there was the usual drivers at 20mph but it didn’t matter as there was no rush.

Just before the top of Loch Lomond the rain started and as i drove further the rain got heavier, the thoughts of ” will it be worth it ” passed through my head but I continued on.

Arriving in Tyndrum the rain was still falling so a tactical retreat to The Real Food Cafe was called for.

As I drank my pint of coffee i checked the MWIS to get the updated forecast.

As I finished the sun had came out so I drove down to the car park at Dalrigh and got set to go.

As I walked up the Cononish valley I got the first glimpse of the mighty Ben Lui with a wisp of cloud blowing of the top.

The wind was blowing and moving the clouds at fair old rate as I ascended to the end of the track, the temperature dropped a bit as I walked into the shadow that Ben Lui had created. 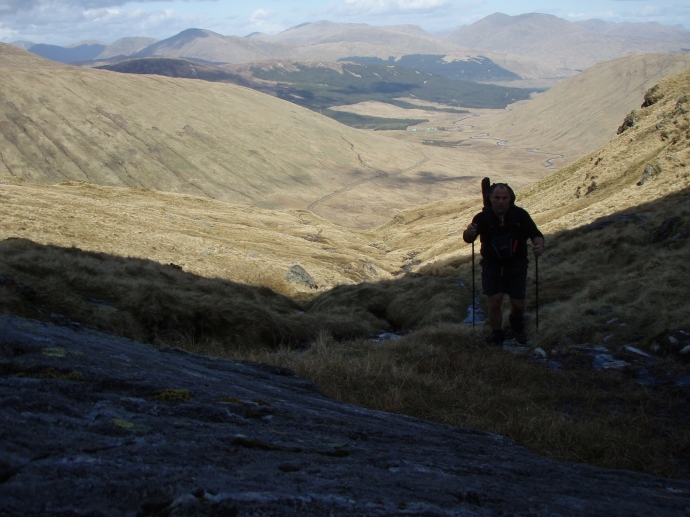 Once into the corrie the going got a bit tougher with ground getting steeper and steeper.

This of course gave a good excuse to stop and take some photies of the local plant life.

I looked on as the slope steepened more trying to chose the best route to the summit.

The book said that the NW  ridge is the way to reach the summit but there was a finger of snow going up the central gully that I just could not ignore !

I kicked steps into the snow and gained height rapidly before traversing left onto the buttress for a bit of exposed scrambling on the final ridge to the top.

As I reached the top the wisps of cloud lifted to give a clear blue sky !

As I looked at all the tops I attempted to name a few, if PTC  was here he would of rhymed them off as fast as you like !

I don’t have that memory capacity so just soaked up the view. 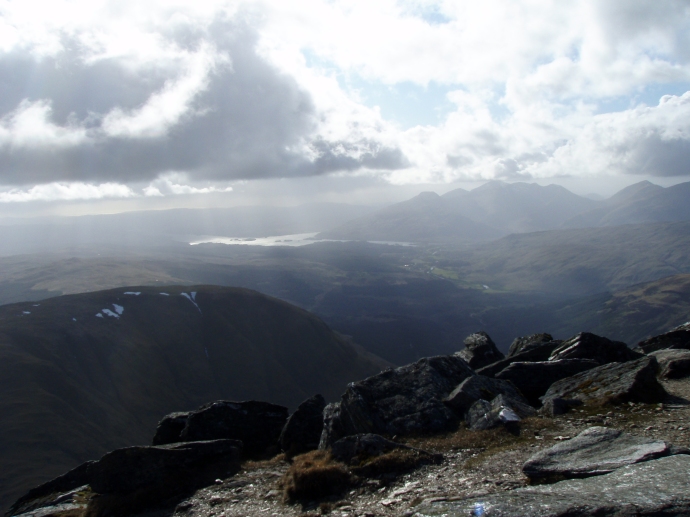 Lui is a definite one to do in a clear day to get the best of it, the combination of the sharp shoulder ridges and its height make it an impressive site.

I descended down the back towards the saddle of Beinn a Chleibh for top number 2 of the trip.

I slipped on a bit of rock and jarred my knee but walked it off as  I reached the top plate aux.

The cloud was again rushing in from the west in a dark silvery blanket .

As I got to the cairn the hail stones started mixed with a bit of snow, as quickly it came in it left and again I had clear blue skies !

It was cold in the now driving wind so I didn’t hang about for long and before I knew it I was back at the saddle.

I traversed round the shoulder of Lui towards Ben Oss and contemplate camping as I my knee throbbed.

I could see the small Lochans on the shoulder of Oss and contemplated pushing on as I still had a couple of hours of daylight left.

I pulled the compass out to check where East was as I was ever hope-full of a sunrise the next day.

Ben Oss was in the way so I pushed on bog trotting and jumping from pete hags and crossing lose boulder strewn slopes.

Light was fading so I found a spot sheltered from the wind and a clear view east, I checked the altimeter on my watch 898M would have to do.

The Genius pitched easily and quickly and it was a total joy to drop behind it out the constant buffeting of wind that I had experienced all day.

The temperature dropped fast as there was no clouds in the sky as I boiled water for a brew and dinner.

My boots were outside in the wind to let them dry out a bit, I think it was more dampness than leakage as my socks were reasonably dry.

I was zonked by about 10:30 cosy in my PHD bag (maybe a little too cosy !) only waking once about 1am to jump out for a quick pee and a look at the stars.

The alarm went off at 5:30 and ever hope full I unzipped the doors to see what the weather was doing ! 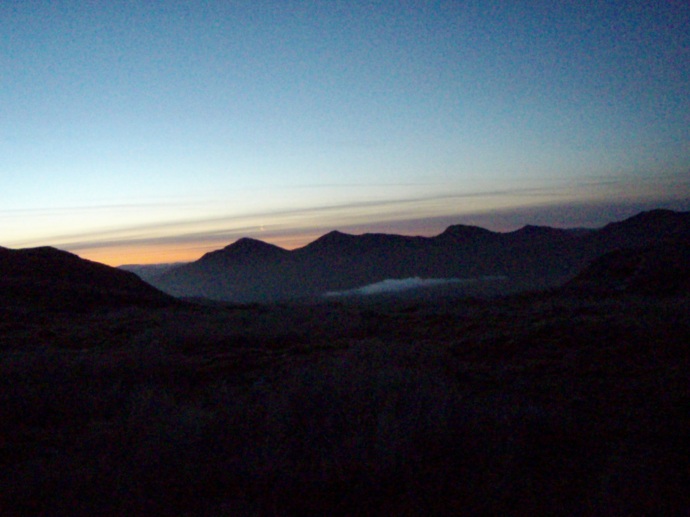 I had a brew as the sun rose higher above the distant hills.

Wisps of clouds caught in the inversion floated past as the moon faded and the sun grew stronger.

I drifted back off to sleep with the doors open on the tent in an attempt to get rid of the condensation that had built op in the tent overnight. 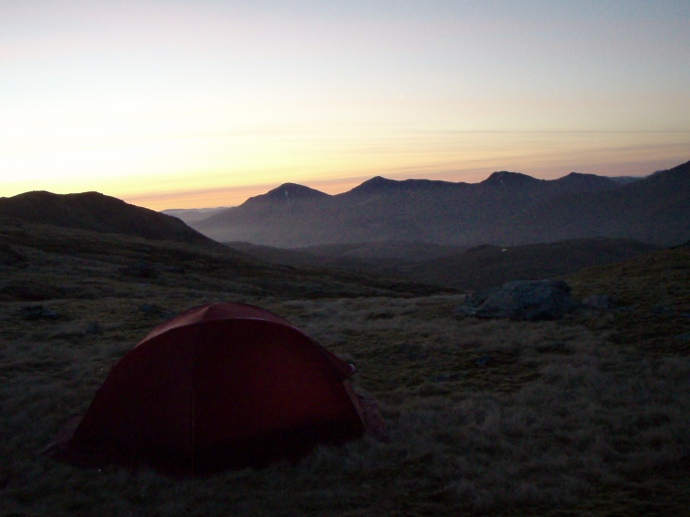 It was windy when I went to sleep but this had gone and it was beautifully still outside as the sun warmed my face.

I woke at 7.30 again with clear skies the stove was on for a brew and breakfast.

After breakfast I walked up the hill a wee bit with my coffee to take in more views, I was so lucky to get this window of the world !

I don’t know if it was the cold playing havoc with the camera but the photos were disappointingly grainy !

The top of Ben Lui was clear but still not quite in the sun as I finished my coffee and headed back to the tent to pack up.

Packed I started the ascent aware that my knee was a bit stiff, I prayed that it would wear off as I started moving.

By 8.45 I was on the top in the wind again and rapid moving cloud dispersing to give spectacular glimpses of the view from the top of Ben Oss.

I pushed on dropping back into the cloud, having learnt from past lessons I walked on bearings to ensure I did not drop off the wrong side of the hill.

I got to the saddle between Oss and Beinn Dubhchraig in reasonable time realising that the path I chose not to trust had rejoined my route.

A lonely character loomed out the cloud in front of me having summit-ed Beinn Dubhchraig already we chatted about what we were doing then went out different ways as the wind hammered us.

On the summit it was windy with limited views (you cant have it all your own way) as I sent another spot and had a drink. 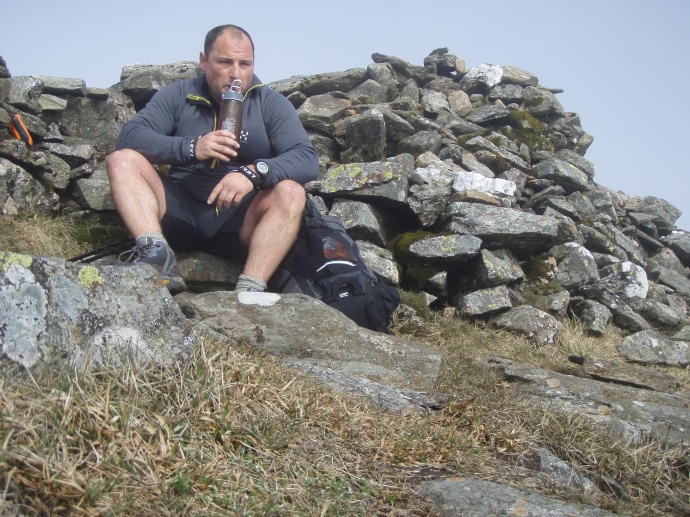 The sun was bright and trying its hardest to burn through as I descended back to the saddle where the Dubhchraig river starts.

I followed the Dubhchraig down enjoying being out the wind again and the warm sun on my face.

I picked up the path on the other side of the deer fence choosing to follow the river path and not the forestry track.

I was glad I did as it was nice to walk through the Caledonian Pine Forrest of native species distracting you from the ever wet muddy path.

I was not setting any records with the speed I was covering the ground back to the car, I was just dilly dallying along enjoying the weather and the views.

I arrived back at the car just after 12 noon, the sun was strong and I could fell my head starting to burn with a combination of sun and windburn !

All in all a good 2 days, great mountains and a good wee test for the genius.

The genius took my pack weight up to 11kg but I think the sacrifice for stability and room is worth it.