Kit packed and work finished I met up with John from Alba Adventures as he was kindly driving the bus up to Fort William for us and the following us down the road “just in case”.

We picked up Craig and Iain from St  Georges Cross and then to PTC HQ for the last man.

There was no road bikers as they had pulled out the night before due to injury.

We trundled up the A82 and the banter was up beat despite getting stuck in road works.

On arrival we checked in to the hotel and then had dinner, again the banter was good and there was much forecasting of where we would be and when.

Iain & Craig whet off to admin kit, PTC and went across the road for coffee.

After we departed for the rooms, I watched the news whilst sorting out kit.

I dropped the poles off to Crag and Iain’s room and they made the decision that they were off at about 06:30/07:00 hrs and that they would drop their spare kit at my room so it was safe.

I lay in bed watching the clock cycle through the minutes of the hours, I really needed/wanted to sleep but apart from the odd 15 minutes it wasn’t happening.

Eventually I drifted up and was woken by my alarm, 2 minutes later Craig knocked the door and their bags were dumped and the boys were off.

I snoozed for another half hour and then got dressed, packed final kit and left the room.

It was frosty outside and I was glad of my newly acquired PHD Down vest and Smartwool training Beanie.

There was no sign of anybody so I sent a text and John and PTC arrived 10mins later.

We loaded everything into the bus and then crossed the road for brekie in Morrisons before heading for the start of the WHW. 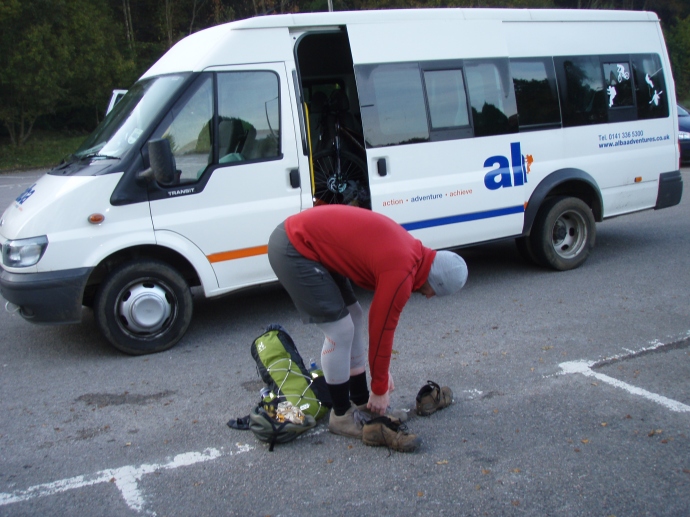 Shoes changed and SPOT pings sent we were off, the cold air burning the lungs as we warmed up and got into the swing of things.

We cut off the road and started on the real path up the hill from Glen Nevis.

I had dreaded this but was happy to realise it wasnt as steep as I thought. 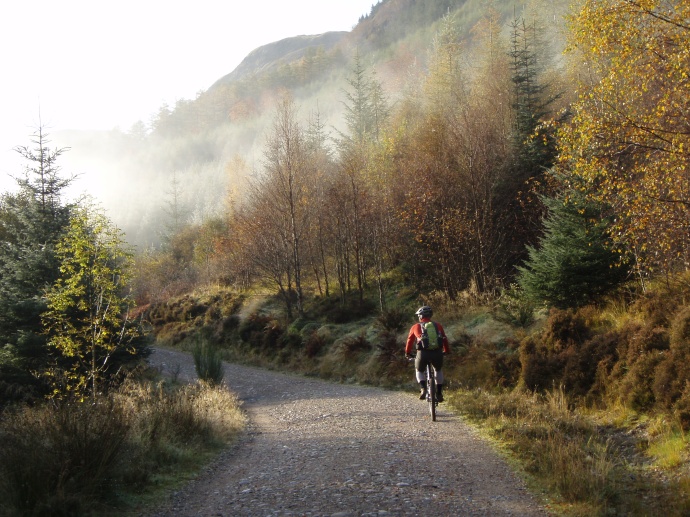 The mist hung in the valley as we climbed through it and were greeted with blue skies.

That and the combination of the trees and bracken changing colour drew out a bike smile on both our faces as we spun on up the hill. 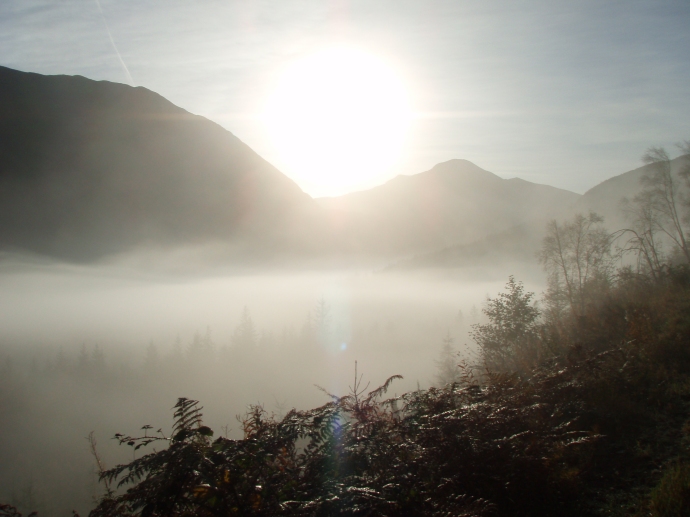 Out the mist we were greeted with flawless views of the top of the Ben, we both commented on the fact that any body out on the hills were going to have a good one !

The path leaves the main track and heads into the woods giving some nice single track to ride and a few annoying steps to climb.

The change in terrain relaxed us and I mentally ticked off the first leg in my head.

We stopped off at the top of one of the hills after climbing some god awful set of steps and sent another ping.

We trundled on through the woods enjoying the single track till we broke through the green canopy and were greeted with an amazing view in a South Westerly direction.

We climbed the deer fence and wheeled on along the track, a few bits being tricky to ride. 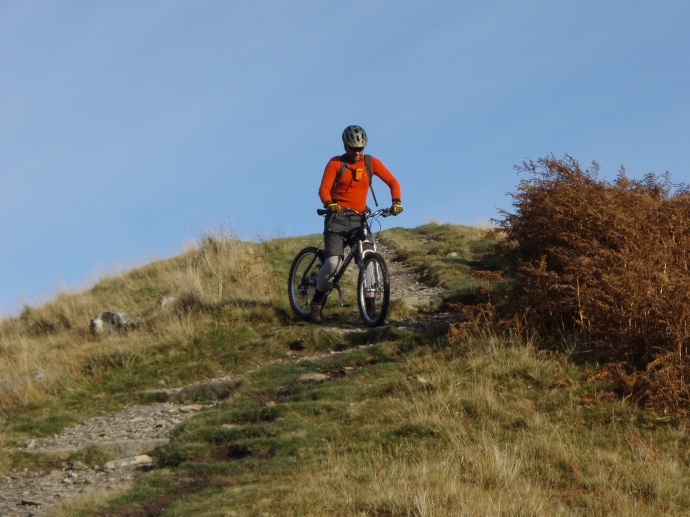 Its hard to look around you and soak up the view when you are concentrating on the track in front of you.

Every look up is worth it ! 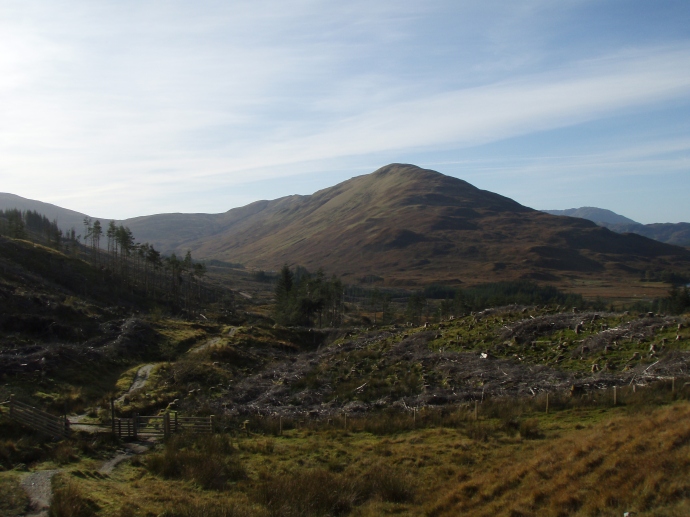 We reached the information shelter, I remembered this from the last time, 8 miles to Kinlochleven.

The track was changeable from loose pebbles to muddy track and some minor fording of rivers.

As we the track bends and heads Eastward we were greeted amazing views and great tracks to ride.

We started passing lots of walkers and we were even passed by a guy on a motor bike.

We stopped for a proper break and to send a SPOT ping.

Onwards and we soaked up the miles, the track undulating with some steep short climbs and some technical loose downhill taking all the concentration you had to keep the bike the way it should be.

Just before Kinlochleven we passed a guy walking with his daughter, he commented that someone was waiting for us at the top of the hill.

It turned out to John who had biked in whilst waiting for us.

It was good to see him and we all set off enjoying the downhill.

This soon changed at the final hill at Kinlochleven, the track gets super steep and eroded.

Storm drains threaten to buckle wheels or send you over the handlebars and loose stones disrupt breaking.

At one point I was so engrossed in the track that I missed the left hand turn and ended up following what could be described as a ditch.

I stopped and waited for PTC, after 5 mins I shouted then walked up the ditch.

It was only then I saw the post and the track going off to the left.

I picked up the bike and got back on track.

on getting to the road there wan PTC I gambled that he must be ahead of me and headed for the Ice Factor, right enough him and John were there.

We had a bit of lunch and prepared ourselves for the climb out of Kinlochleven.

We biked as much as we could and then pushed the rest.

The fun was yet to begin as we left the main track at the sign and headed upwards again with a mixture of riding, pushing and carrying. 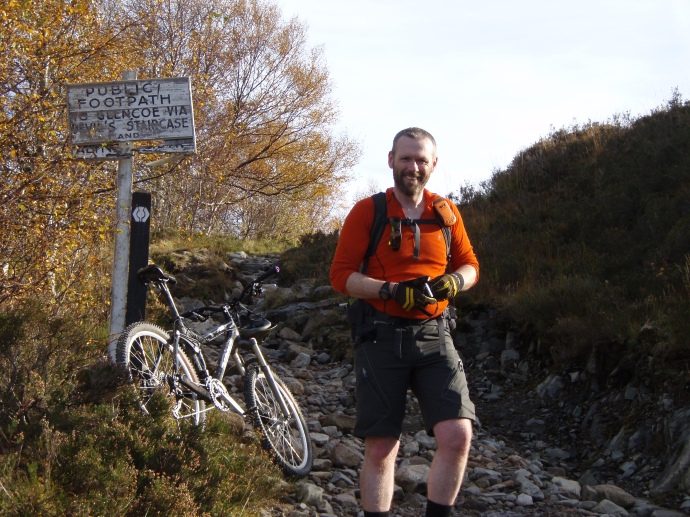 It was warm in the sun as we finally reached the top of the Devils Staircase.

We stopped for a  cheese and jerky break, PTC had a wee chat to a group of lads biking the other way as I watched a wisp of cloud float over the top of the Ben. 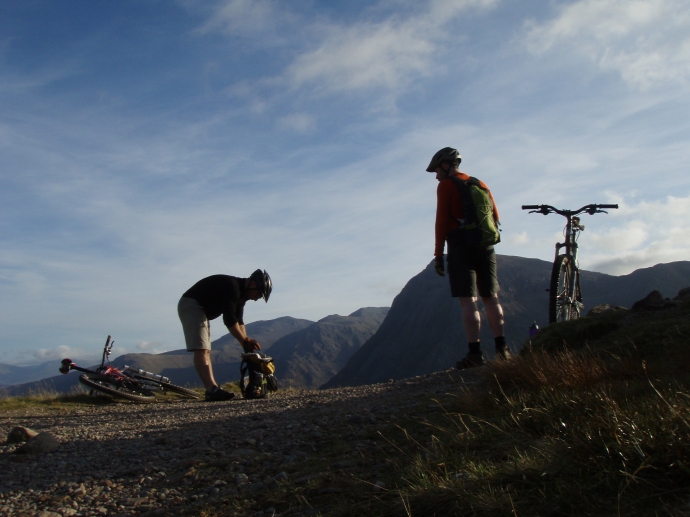 In theory you blackmail your mind with the fact that you are going uphill and there will be a really good downhill soon.

The Devils staircase was not to be that !

Instead of a nice track section we were greeted with yet more storm drains and eroded track.

I guess if you wer on a day oot wi pals some more of this would be rideable, but the fact you are out for 2 days definitely plays on your mind.

Finally down the track we spun on to Kingshouse where we met the bus again.

John told us the boys were well ahead of us, the carry out of Kinlochleven had lost us any time we had gained.

We ate jerky admined lights and sorted for the next stage. 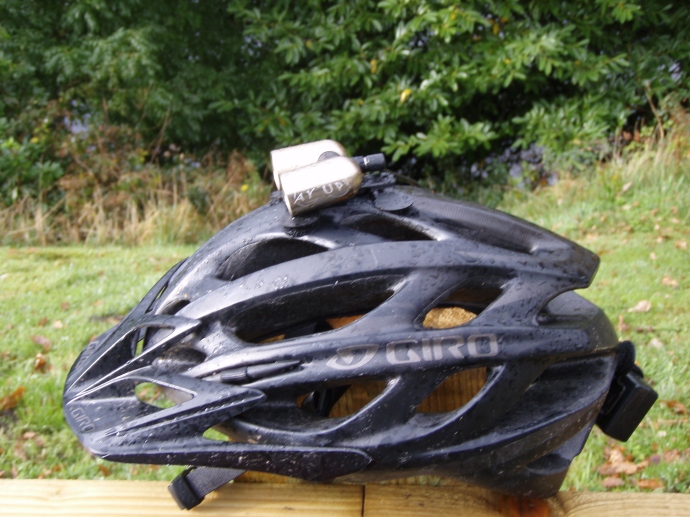 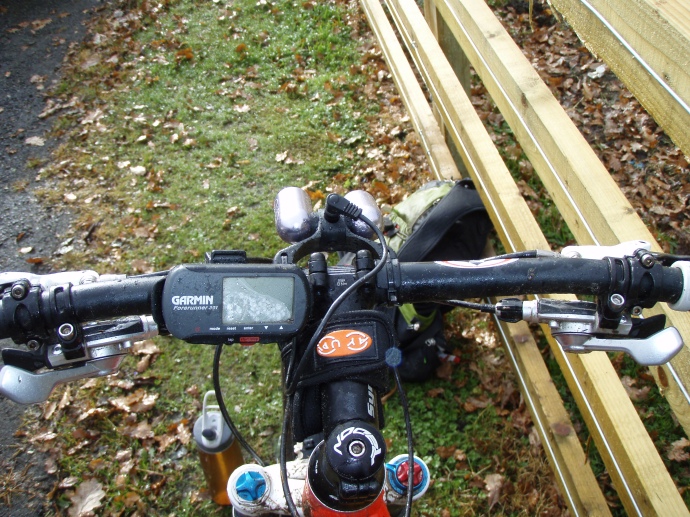 It was getting colder and I changed the lenses on my Julbo glasses to clear.

We set off again with the climbs taking the toll on our legs.

Across the road we branched off the main road and onto the track, it always feels a big commitment when you leave the road here as there is only one way oot and thats on the other side !.

The sun was almost setting and causing the hills to get “moody ” in the failing light.

There is a PTC in there if you look hard enough

The track snakes off into the distance in a nice rewarding downhill.

The stags roared in the not so distance adding to the whole scene.

This is what you do it for !

Once the light was gone we were focused into our own little world of LED.

I only had my helmet lights on to start with as that was plenty.

The cobbles vibrated the bike as we rolled on.

After crossing Ba Bridge I looked behind me to see no light from PTC.

I was starting to curse not having  the radios that we were going to take.

Finally a light was in sight and we were back together as we stopped for a break and I put my Kaza pull over on to keep the chill off.

Hitting the road we spun on passing a car with cans of guiness on the roof, I was tempted.

We were told prior that the section from Inveroran Hotel to Bridge of Orchy was not to be biked so we skirted round the road taking the extra 1km hit.

We arrived at the bus feeling good, this was boosted by John telling us that the boys had just left !

A quick munch we were off again under the railway and spinning along the track.

We constantly searched in front of us for a reflection in our lights from the Ace packs or a hint of head torches.

Finally we caught them as we skirted round what was left of Beinn Dorain, we chatted and pushed for a while and then took off back in the saddle.

We cursed through the railway tunnel before Tyndrum as we had one more bit of pushing to do.

Soon we were free wheeling into Tyndrum and dismounting at the Real Food Cafe.

A few of the PTC regulars were there to greet us with friendly faces and cans of irn bru.

It was cold and the beanie and vest was on as soon as.

Then a pint of coffee and some food.

Just as we were finishing the runners arrived and it was smiles all round.

We finally dropped Craig and Iain off at the B&B (after driving round Tyndrum for ages) and then made our way to Strathfillan House.

It was an icy welcome due to lack of communication and the late hour.

I didnt care, I wanted a shower and bed so I was fresh for the morning.

PTC and I had some discussion re the next day, he was tired and I suggested he slept on it, I also mentioned that no matter what I was finishing the next day as I felt good.

I was happy to go solo if need be, I didnt want to be solo but someone had to finish the mission.

In hindsight I might of came across a bit strong.

The light was off at midnight before we turned into pumpkins !

Part 2 is another day and another story.

Sleep was intermittent again and the alarm went off at 06:30hrs …………