I had drifted in and out of sleep again, so I was awake before the alarm went off.

I lay in the dark for 10 minutes considering the options.

I put the light on and PTC rocketed bolt upright in his bed with the comment ” I cant see, I cant feel my hands !”

It did not look good.

I got up and stuck my bike kit on and went outside and cleaned my bike and lubed the chain.

My front brakes had been making a weird squeaking noise so I checked the pads but could not see anything wrong.

Kit sorted I looked at the B&B but there was no movement.

I restled with the thought of just getting on the bike and cycling along the road to Tyndrum to send a SPOT ping and then ride on.

I returned to the B&B front door to find it was locked, I hadn’t put the snib on the yale lock so I was locked out.

PTC did not have a signal so I phoned John and woke him up and asked him to let me in.

I returned to the room to find PTC getting up and into his bike gear, happy days the team is on.

We drove to Tyndrum and were told the The Real Food Cafe was in winter opening hours.

We picked Craig and Iain up and parked in the Green Welly car park and went for breakfast.

There was a bit of confusion as to wat was happening, was Craig in or out?

He was changed from running gear to casual so I thought he was out.

PTC was undecided but I thought he up for it.

I went outside and unloaded the bikes and the kit.

I took my down vest off and packed everything away, I stood around for another 5 minutes getting cold then walked to the door of the cafe to see PTC with another Coffee !

I was raging I thought the decision had been made to move, obviously not.

He waved me in but the mist over my eyes as I waved “stuff you”.

I got on the bike and started in the heavier rain.

If we had left when I said we would have been further down the track by now.

I had mixed emotions now as I snaked along the river bank out of Tyndrum.

The legs felt good as I ate up the miles and before I knew it I was at the bottom of the climb at Ewich.

I biked as much as I could and carried the rest, I remembered walking this with Jules and John a while back and decided that there was no stopping till the view point.

The rain got heavier but I was still warm in the smartwool top and Kaza.

I stopped briefly at the picnic bench for a drink, there wasnt much of a view just cloud and semi darkness despite it being light.

The single track from here was great and I enjoyed the downhill ride, even the muddy bit behind the farm was not as bad as I remembered it and I cycled straight through it all.

I crossed the road and railway and pushed on, I stopped to chat to a guy who was walking the way with his daughter and then wished them well.

At the bridge beside The Falls of Falloch I noted the slippy wood on the base, but did not note the end of my left handlebar.

It caught the handrail and sent me skidding, with the bike hanging through the gap on the handrail only attached to me via my shoes.

Just after that I met John who had biked in to meet me.

We free wheeled down to Beinglas and he said PTC was at Inverarnan having biked round on the road.

I told him I would wait 15 minutes and then I would go.

I topped up my bottles and ate some Jelly Belly Beans which gave me a wee boost.

Had he dropped out ?

I biked a bit and then it all came to a halt, the track disappeared and it was back to carrying and pushing.

I passed couple of guys walking and the mentioned that my mucker was about 10 minutes in front of me ?????

They also said the going was hellish and that it was really slippy.

I pushed on climbing up rocks and negotiating narrow gaps that were like a problem solving exercise to get a bike through.

I stopped for lunch on a tree overhanging the loch.

I contemplated dropping the bike into the water and walking the rest.

The sun started to come out and the dappled light threw up amazing colours in the moss and the wet rock.

I passed another walker who informed me that he just had a 15 minute conversation with PTC and he was just in front of me.

I finally caught up with him and shouted, he turned round looked at me and kept going.

Finally we got to a point we could ride the bike and we finally broke the ice in an awkward kind of chat.

We pushed onto Inversnaid as the sun got stronger.

A quick break and we were off again.

The steps up to path by the hotel were a killer and the path was semi rideable with some bits you had to get off and push again.

We climbed up away from the loch and decided to stop at the top to take layers off and have some food.

We spun on elated to see Rowerdennan, a quick break for some jerky and Irn Bru and we were off again.

I turned around and there was no PTC ! it turns out Ange was at the car park and he had stopped to speak to her.

I waited and he caught up in a few minutes before we pushed on.

We chose the road as time was pushing on, we again had a quick stop in Balmaha.

You forget how steep some of the wee climbs are on the road when you drive it.

Balmaha to Drymen flew in despite the best efforts of cars to kill us by overtaking on bends with cars coming the other way.

The thought went through my head “If you knock me off my bike you better hope you kill me, cause if I get up I will fecking kill you !”

Still the legs spun on, they were tired but not shot to bits like I had felt on the Wandae.

We rejoined the path and cut across the field, the waymarks are hard to see as you climb the wee hill and get a glimpse of Dumgoyne in the distance. 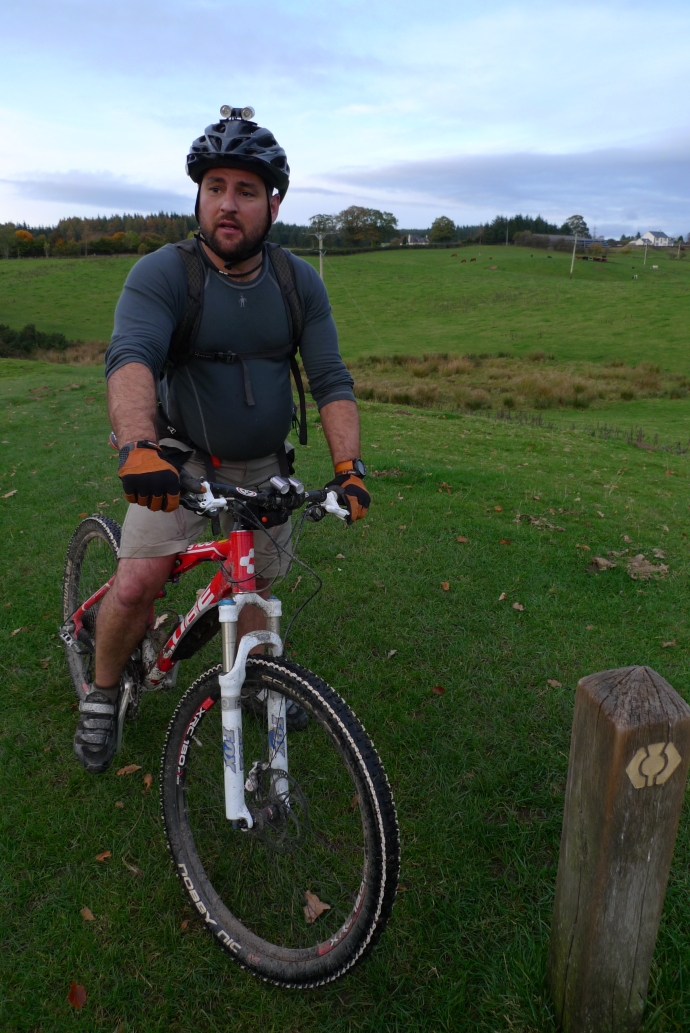 More road and hill but we were in good spirits and spun on chatting away.

We hit the gate at Gartness, a sign of things to come and we were spinning quite fast and getting a good old speed up in between the gates.

Was it because we could smell the air of home or was the crazy buzz from Irn Bru,jelly Belly Beans and Jerky ?

We left the Beach Tree car park after another crazy concoction of jerky and a mule bar.

I was having to keep stuffing my face with food to keep the boiler going.

We chatted about real food as we spun on to the last climb at Dumgoyach.

The lights were on now and I was still using the same battery from yesterday.

I am sure its only supposed to last an hour and a half but it was going strong.

We crossed the road at the Carbeth, John commented on ho bright the lights were and that we keeping a good pace now.

After a short climb at Carbeth that for some strange reason I had built up in my mind that it was longer and steeper we flashed past Craigallian Loch and to the road at the back of Mugdock Park. 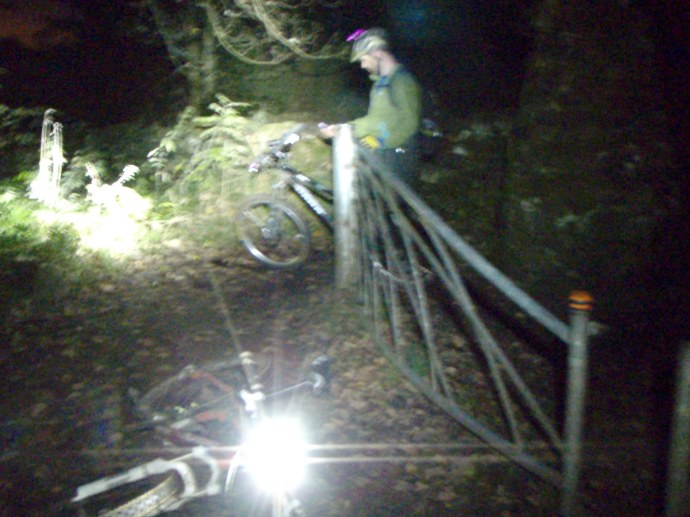 The home straight was in front of us and I had cycled and walked this bit a fair few times.

We free wheeled down the track with the lights creating a tunnel of light in front of us.

I felt sorry for any body out walking their digs and being blinded by the lights, but there was nobody to be seen.

We reached the crest of the hill just out of the woods and could see the lights of Milngavie.

Neither of us tempted fate by saying we were there, instead we soaked up the view and then once again free wheeled downwards and closer to the goal.

The track is nice from here to the town centre but you become ever increasingly aware of civilisation around you and cars etc.

We could see the finish and John standing leaning on the hand rail of the ramp.

I bunny hopped onto the pavement and changed gears for the last hill, I heard a curse and PTC had struggled with the curb getting his timing all wrong.

19.40hrs we hugged the pillar of the start/finish of the West Highland Way.

The spot would not send and it took sticking it in the middle of the Marks and Spencers car park for it to send.

So the mission was completed and the picture above says it all.

Thanks again to every one for the support before and after it was greatly appreciated !