I had been watching the forecast all week and finally there was a window.

Of course it could not be properly on the weekend but Sunday/Monday.

I packed my stuff on the Sunday morning and was off, a little later than I should.

I chosen Ben More and Stob Binnein as my target as I had driven past it from so many direction but never climbed it.

As I headed North on the A82 the snow capped peaks came into view mixed with the trees turning orange and brown.

I parked up at the very busy car park contemplating if the car would be safe by the road.

I threw the rucksack on and I was off.

It was a pleasant way to start following the track up the valley and strangely enough my legs felt good despite the pace and lack of activity since the WHW Fall Doon.

It looked as if the sun had not made it into the valley as everything was in shadow apart from the very tops which were dusted with snow. 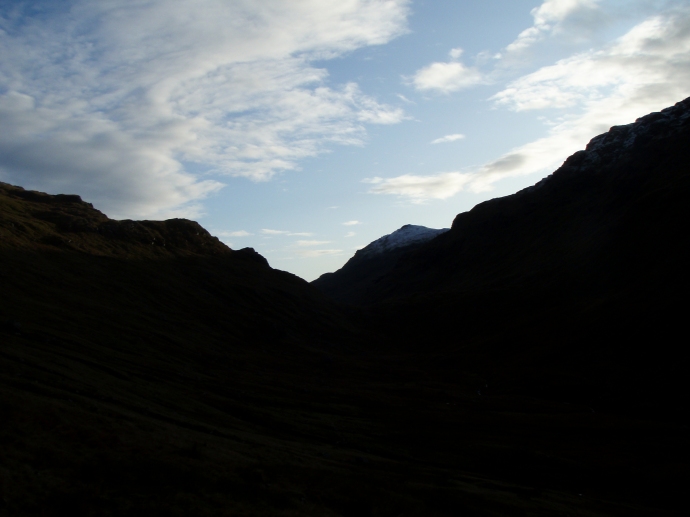 I just had a Chocolate Fish base layer on but was pleasantly warm as I left the main track and started to contour round the hill and upwards towards the Bealach.

I passed only a couple of people on the way up which was strange given the amount of cars parked at the road.

The view from Bealach was amazing with the inversion already sitting in the valley. 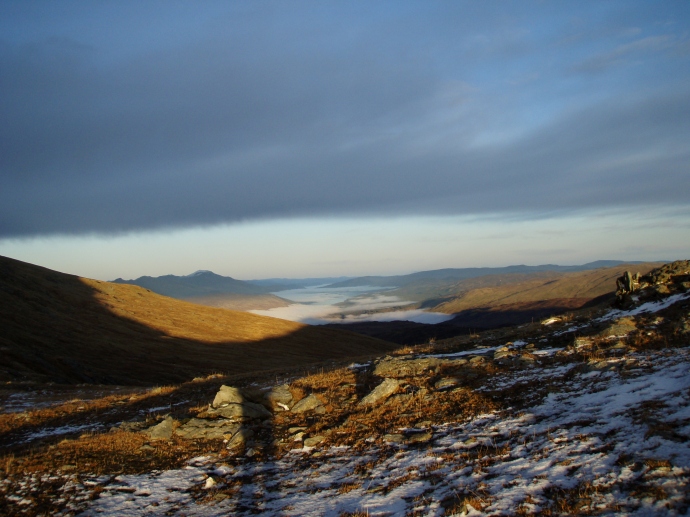 I quickly climbed to the top of Ben More but the top was bare and rocky and i could not really see enough flat space for a tent.

I legged it back to the Bealach and the climbed Stob Binnien just as the sun was setting. 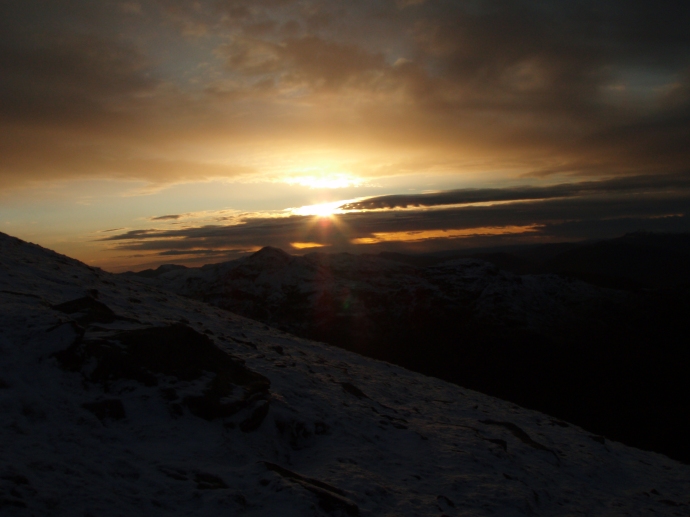 I trotted onto the summit as a token gesture and then dropped down a couple of meters back on myself to a flat spot in the snow I spotted.

I stuck the barrier jacket on and glove before my hands got cold and the tent was up in no time despite the frozen rocky ground.

As I got sorted the sun was right down over the horizon, making the sky look like it was on fire. 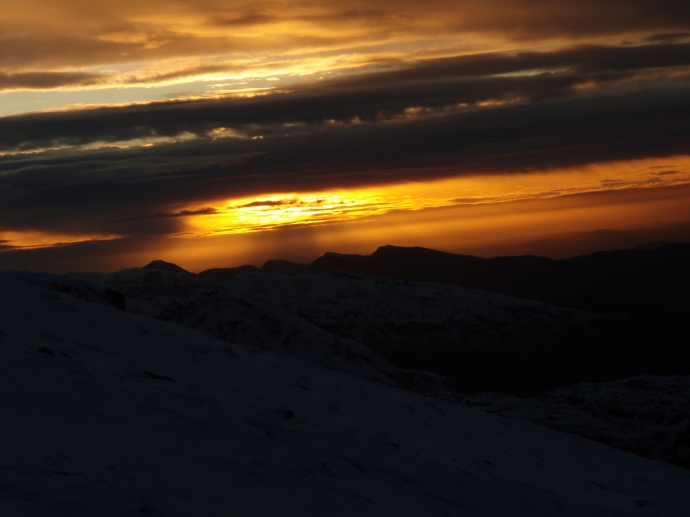 Its all gone a bit Lord of the rings!

I melted snow as I stupidly had not filled the nalgene bottle up at the last stream.

I filled the bottle and then had a brew as I watched the sky changing colour still and the last of the light fading. 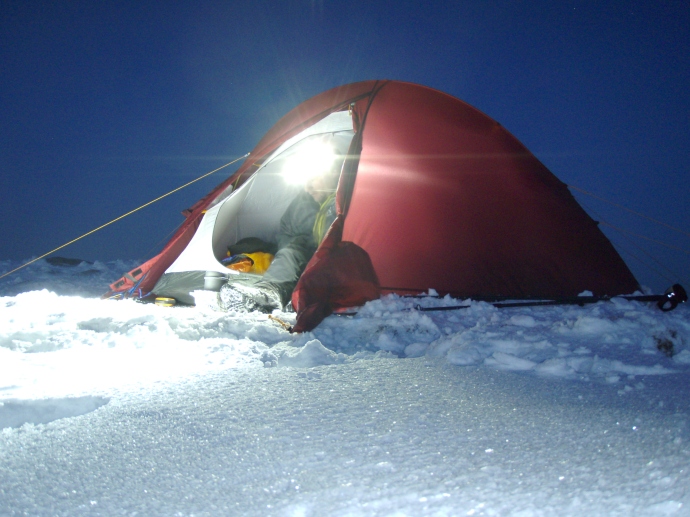 The light you can see above is the AY-UP bike light converted to the head torch, this is the same battery as I used on the West Highland Way a few weeks back and it has not been charged since.

More on them later.

I melted more snow and boiled water for my sweet and sour chicken from Exped Foods, it turned out to be nice with loads of flavour.

I settled down and read my book for a while and the drifted off for a snooze.

I woke up about 10pm and a look outside to see what was happening, it was -2 Degrees celsius inside the tent and I ate to think what it was outside !

I done another few chapters of my book then snuggled down into the Minimus had it been a mistake to bring that and not the Minim 500 ?

I was on the neo air for the first time too and was vert comfy on it despite the dread of it being so narrow.

I drifted in and out of sleep through the night I was warm but then I had kept layers on. 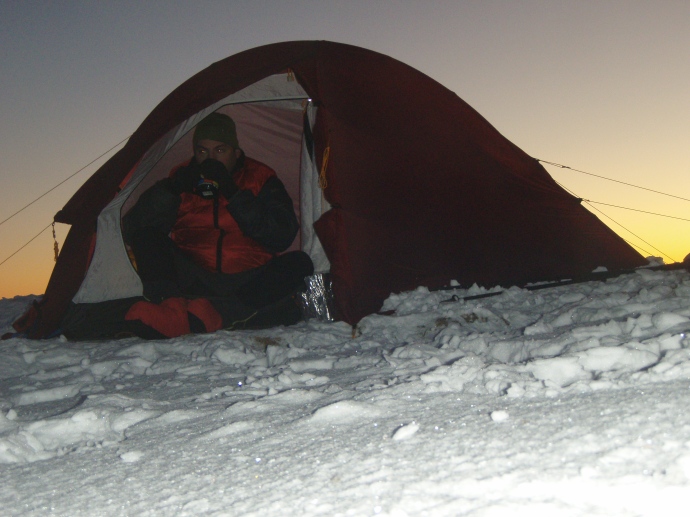 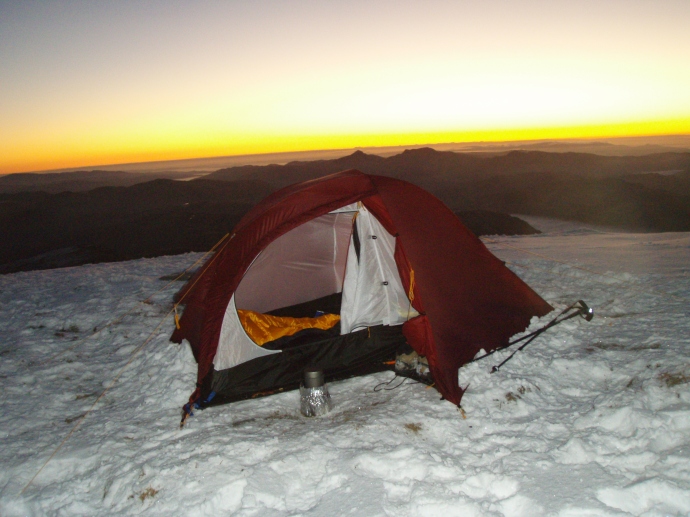 I had another brew and stood as the sun suddenly appeared over the horizon, I was shocked how fast it was appearing so I took some video. 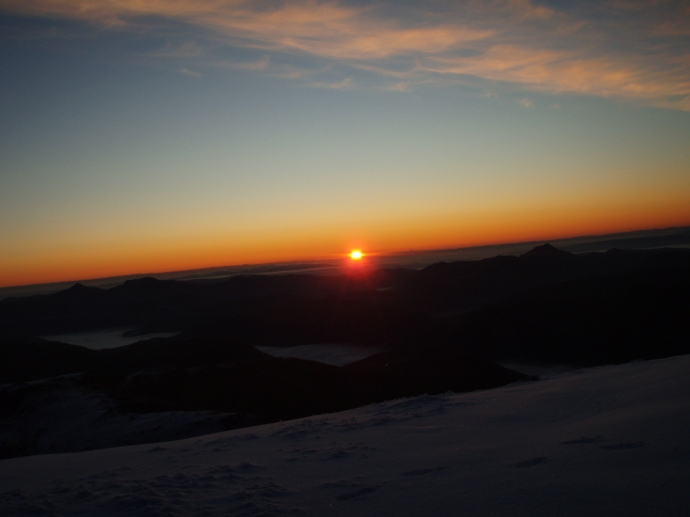 I stood on the summit mesmerized by the sun getting higher and higher, the colours changing on the mountains around me.

It wa cold in the wind that picked up too and I was glad of the PHD Booties that I had on (I took the dry bags off them for the photo !) 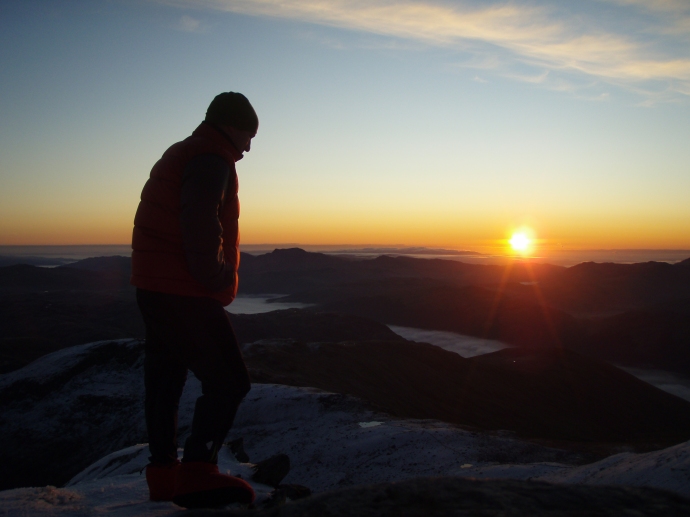 I jumped back into the shelter of the tent out the wind, Suunto said it was -4 outside add the windchill to that and I was glad of the heat from another brew whilst I took in the inversions all around me. 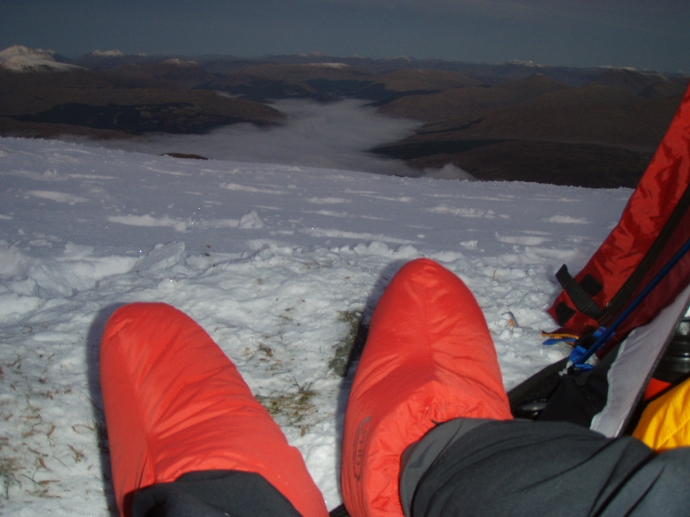 I packed up and headed down the hill on the crisp snow, the tracks from the people the day before had frozen and the compact snow was slippy !

At this point I should of put my crampons on but they were sitting at home.

Dumb choice so I had slowly make my way down the hill.

I dropped down out of the sun making the most of the frozen ground to speed my descent to the floor of the Glen, as all the bog was frozen. 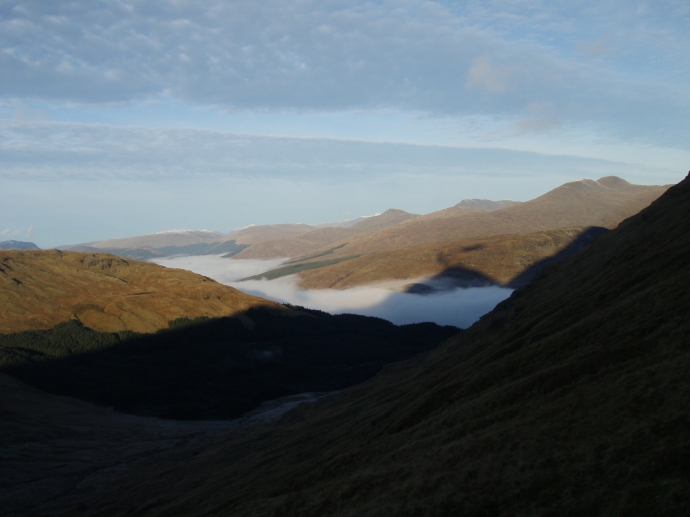 Once on the floor of the Glen it was time to shed some layers, the barrier pullover was stowed as was the gloves despite frost still on the ground. 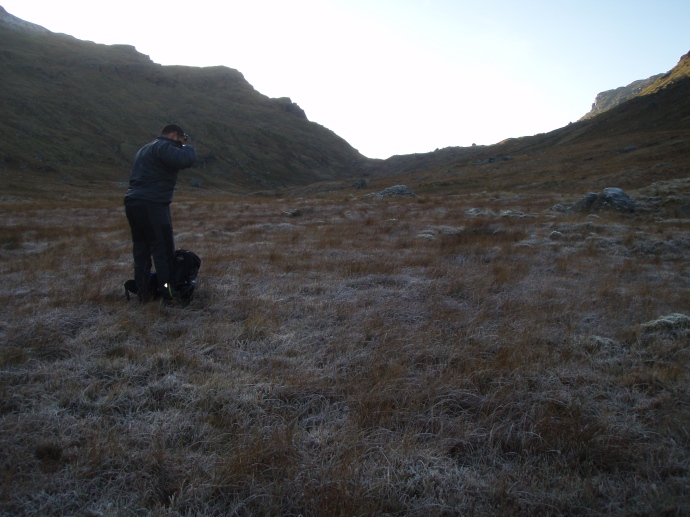 I trotted down the path setting a good pace with the odd few metres of running, it felt good !!

I looked back at the dusting of snow glistening on the tops in the crisp sunshine, those would be for another day. 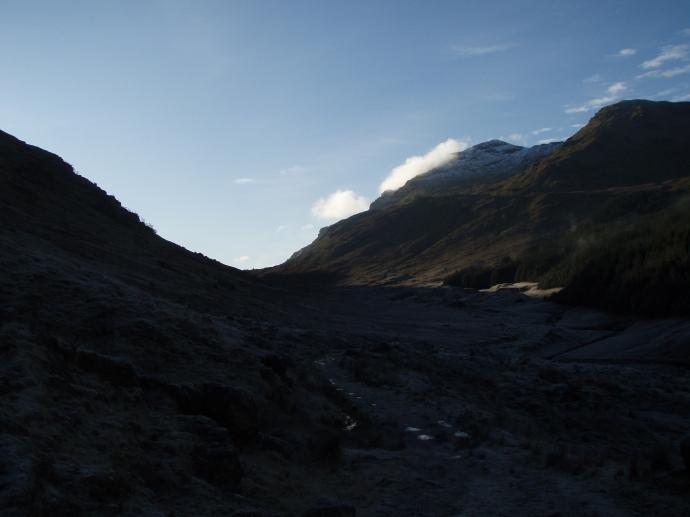 As I reached the cloud line it was almost eerily cold, everything was wrapped in a crisp blanket of frost. 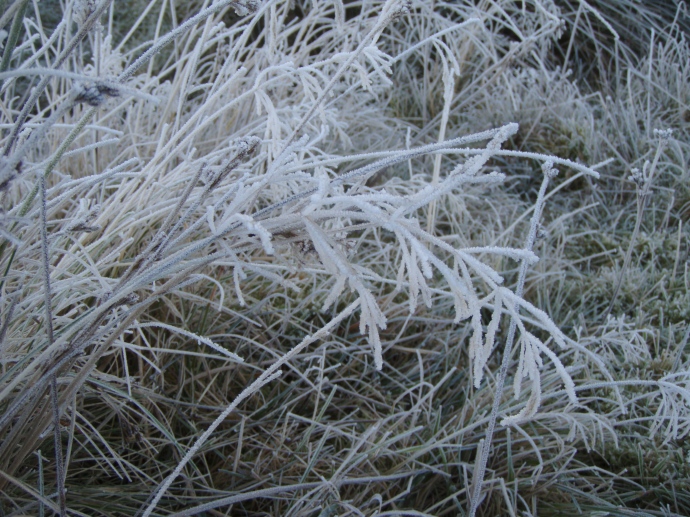 Winter is certainly here and the Snow Claw shovel, Crampons and Ice Axe will be packed for every trip.

I drove down the road happy despite traffic going stupidly slow and got to work for lunch time.

Now that is a good start to the working week !