It had been a while since I had been out in the hills properly !

The weather had been changeable and there was snow on the hills.

After my event got cancelled I met PTC and Stu at Tiso cafe we had lunch and thrashed out an up and coming mission.

I quizzed PTC as to his movements at the weekend and did he fancy doing something ?

Both of us ended up with stuff to do Sat and apart from that the weather wasnt great either.

After a phone conversation it was decided we were heading out, destination unknown we would decide on route as we do so often.

I picked PTC up and we headed North on the A82.

There wasnt as much snow on the tops as I thought there would be, we ignored Arrochar and turned off still on the A82.

Glimpses of stuff through trees wet our appetite, I and even “we” had no agenda, no deadlines no crucial shots to get, instead we were out to satisfy the need to be playing outdoors in the sunshine and the cold !

We pulled into the car park at Inveruglas, I packed my kit into the Berghaus Sentinel as PTC grabbed some food and a cup of coffee from the visitors centre.

It’s always a lottery when the weather is that in between phase, is it winter or autumn, crampons or not, ice axe or not, snowclaw/shovel or not.

I opted for the microspikes and stuck the snowclaw in and strapped the ice axe onto the pack.

For all the weight it was, I would rather have it and not use it than regret having left it in the car as I have done in the past.

We were soon breathing hard as we stepped up the path by the Hydro station and wasnt long till the sun warmed us as well as the heat from our effort.

Once off the track we were in the shade and it soon cooled down, the frost was still sitting on the grass and the ground was wet but with a distinct frozen base to it.

The sun lit the autumn colours up on the hill side and patches of thin cloud and missed passed and created rainbow type colours in the vapour.

We passed a few people coming down and a few people passed us as we stopped for a bite to eat and a brew in a wee dookit out the wind and just below the snow. 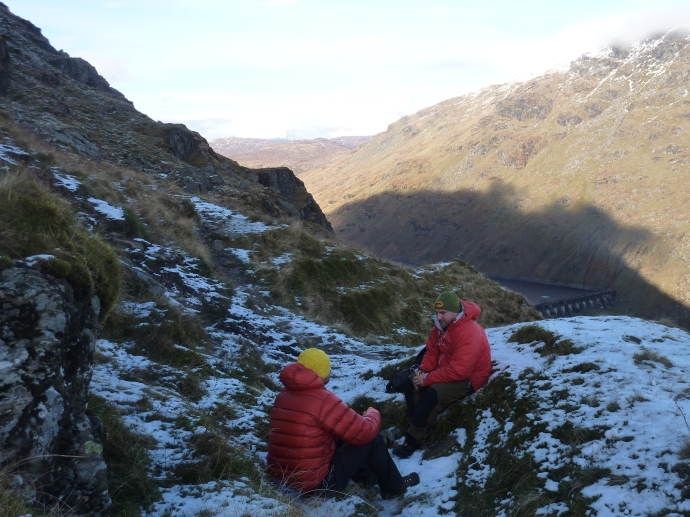 I think we constantly drive past hills like this in a rush to get to the “proper mountains” but Ben Vane really does give you a steep challenge with exposed little outcrops so you have to earn the summit. 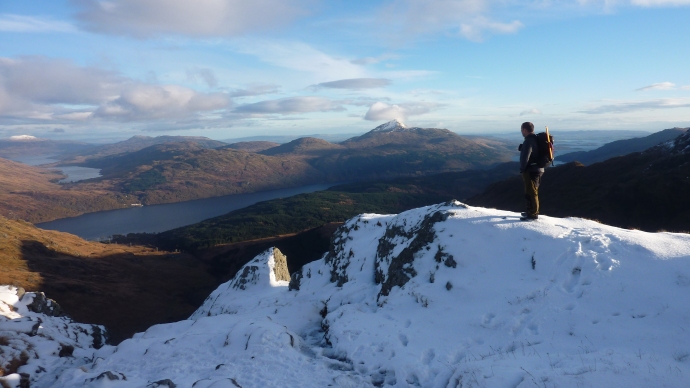 As the sun sank in the sky our shadows were cast on the outcrops almost like strange cave paintings.

Not much further on and not far from the top the cloud starting rolling and creating a much “moodier” feel to the hills all around. 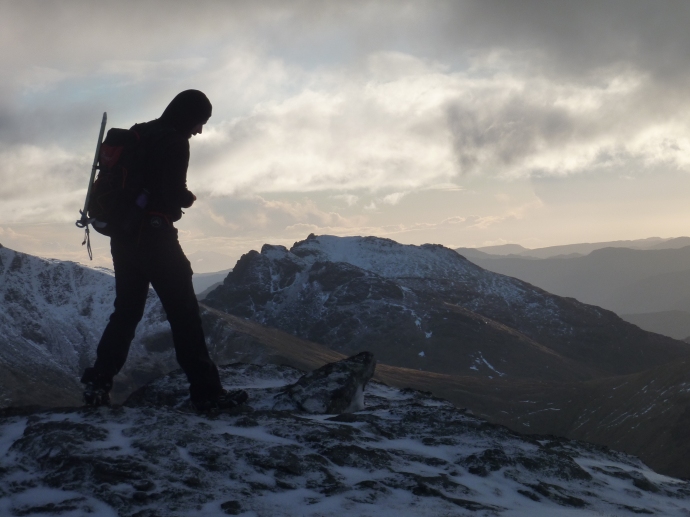 We had another brew on the summit, and stuck our insulating layers, hats and gloves on.

PTC had his Hillsound Trail Crampons on as the snow and ice was brick hard, I had Icebugs on so did not have to bother with the Microspikes.

Some kind soul had left a poppy on the cairn which added to the atmosphere on the top. 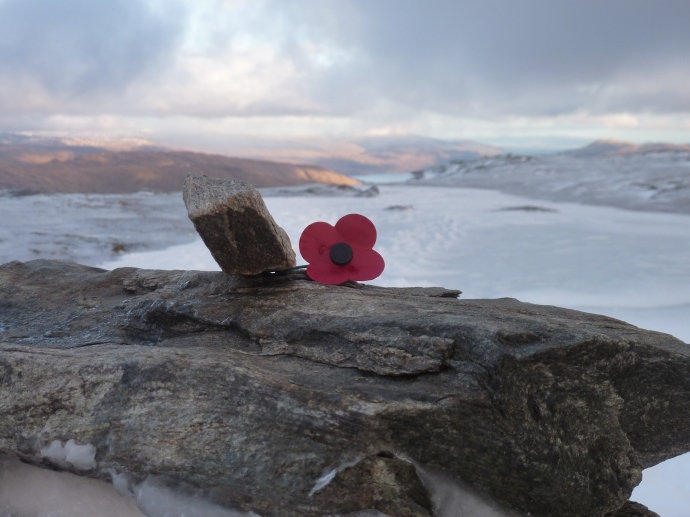 We were both dragging our heels to leave the summit, we should of been pitching tents and climbing into cosy down bags and listening to the roar of the gas stove in anticipation of dinner and a hot cuppa soup.

Instead we sat and watched the sun disappear behind Ben Ime and Narnain and the cloud roll over the ridges like an eerie fog !

It was time to move not because it was getting dark but more we were hungry and it was getting really cold, so much so I kept the Berghaus synthetic Duvet on as we dropped carefully to the Lochan and then down through the boulder field of caves and bottomless holes (it was dark and you could not see the bottom ) !

We played about with cameras trying to get that great blurry effect of water  moving, PTC I am glad to say managed, I did not.

Layers off we hit the track and passed through the tunnel and followed the track back to the road. 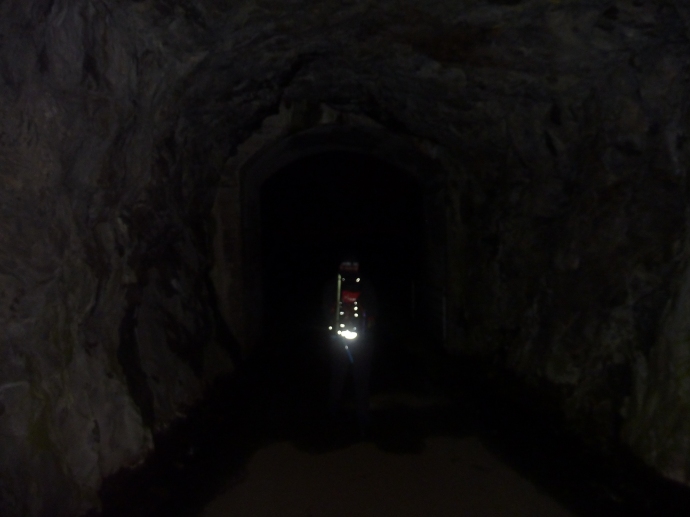 It was a half-moon and the stars were bright, funnily enough we both switched our torches off/ or did not switch them back on after pictures !

My Icebugs crunched loudly on the tarmac all the way back to the car.

Winter is here for sure and you know what that means !

Aye smug grins all round !

5 thoughts on “Hitting a Vane”