The above heading applies to various aspects of this post !

Firstly it had been a while since PTC and I had been in the hills at the same time, and secondly this took place a few weeks ago but i have had not had the time to write it up !.

Since I was in the Perthshire area it was decided to do something close by.

Various coms flew back and forth till Lawers was decided upon.

As ever casual that we are, we met in Killin, had cuppas and cake then struck out in cars for the car park at the now vanished visitors centre.

There was swapping of kit for test kit and much indecision as to what colours to wear !

The path was busy with various people rushing off the hill back to cars before darkness fell.

We veered off for the back stalkers path and did not really see anyone else after that. 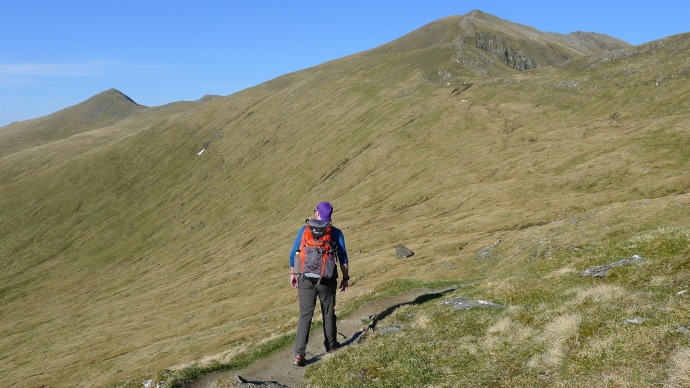 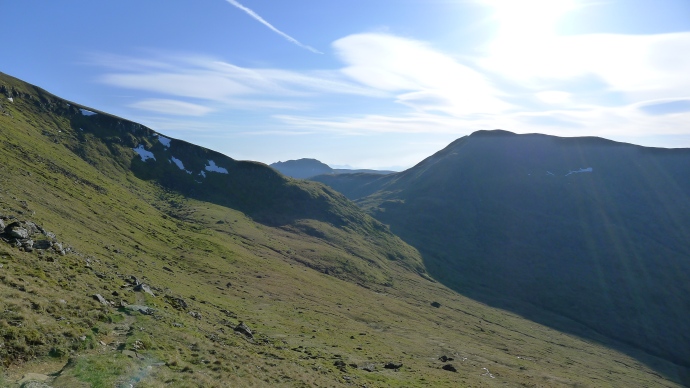 The stalkers path appears to have very little ascent as you contour round Beinn Ghlas, the sting in the tail is when you get to the final push for the top of Lawers.

The jaggy rock distracts you from the hard slog as you pick your way through the small ledges. 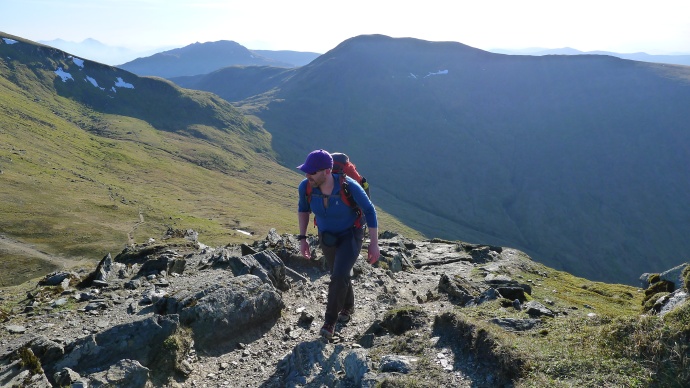 After a short while on the windy summit trying to orientate our selves and name as many visible peaks from all compass points we dipped down the back and headed for jaggy almost lunar looking crater which was to be home for the night.

The tents fluttered in the wind as poles were inserted, the thought of a night disturbed by flapping nylon did not enthuse me one bit, but once pegs held the tent down it was all fine and good ! 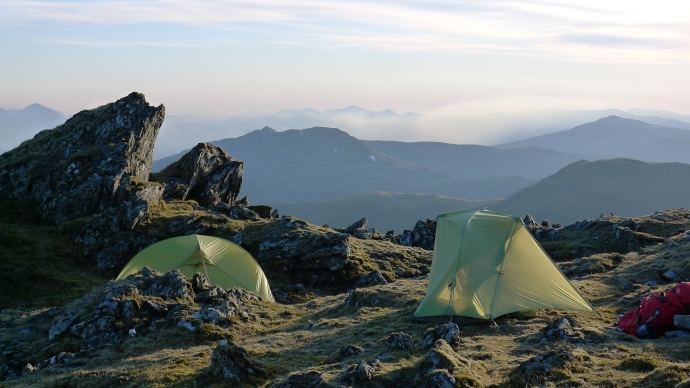 Tents pitched there was only one obvious thing to do ! Yep a brew !

The sun started to dip on the horizon so we made our way up to the summit cairns fully kitted up in Down trousers, hats, gloves and other cosy layers.

As we sat and watched the sun produce the awesome colour show it displays it was good to be back ! 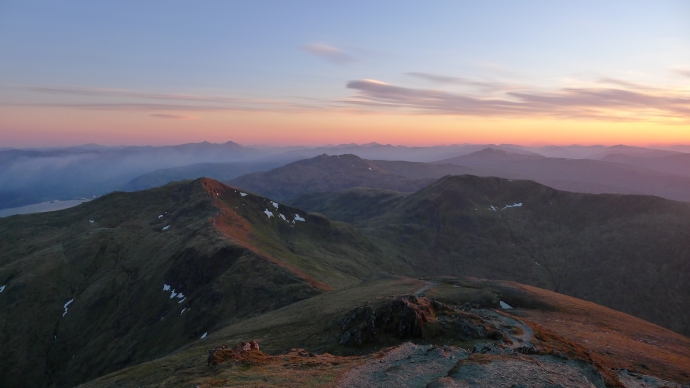 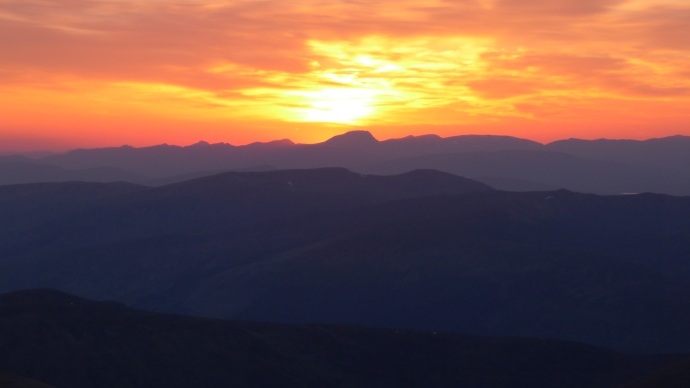 Stomach’s were rumbling so it was time to leave !

Stoves on and water boiled around the Wayfayrer Meatballs that was dinner.

Normally after dinner I would haveclimbed into my bag read my book then fell asleep, normally with my I pod pumping out soothing metal tracks !

Not this night there was much to do !

We were playing with light sticks and red head torch filters whilst cameras counted down through there 60 second shutter opening and then taking what felt like 2 minutes to process it ! 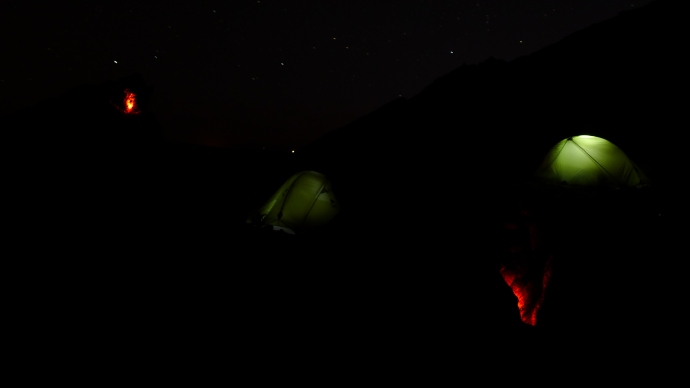 It was all very very Sci Fi ! 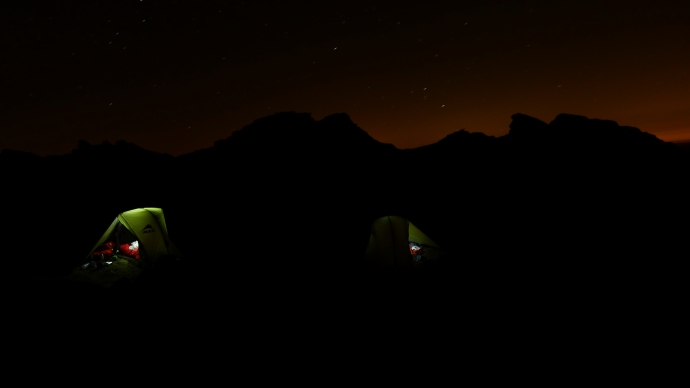 At about 1am we decided enough was enough !

I climbed into my bag and drifted off to sleep happily !

The alarm woke me at 5am I slept straight through the night.

It appeared to be light through the mesh of the inner and the light green outer.

Had I missed the sun coming up ?

I jumped out my bag donning layers as I dashed up the ridge in an easterly direction.

There was a glow but no sun yet.

I ran back down the hill and stuck the stove on and shouted to PTC that he had enough time to get a brew and get ready for the show !

I sat on the ridge brew in hand and waited ! 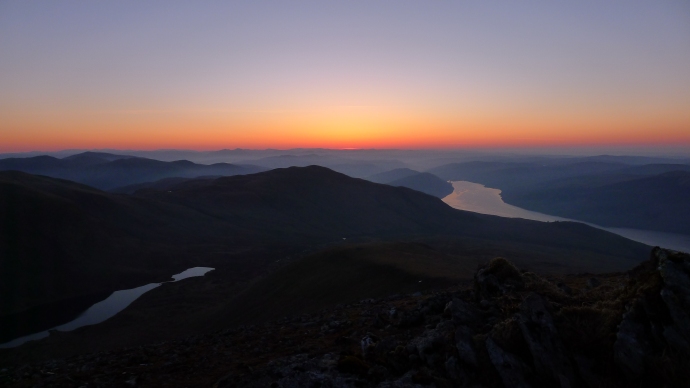 We moved up onto the summit as the light started to spread its warming orangey glow over the hills.

The wind was still blowing hard and the smoke from the fires still sat in the valleys almost hinting at an inversion.

Much as we sat on the top waiting for the distant mist to drift inland and fill the valleys below, it did not happen so we retired back to the tents and packed up.

There was still a bit of exploring to be had before we left the camp site.

We passed people pretty soon as we headed down the hill, various comments were shared as we jogged and bounced from one big stone to another in the ever warming sunlight.

A few near misses with some tourists on the Killin road compounded the fact that it was back to normal life !

A quick visit to the awesome Killin Bakers and a munch on hot steak and black pudding pies, then it was back to the A82 and work for me.

Aye good for the soul as he says !